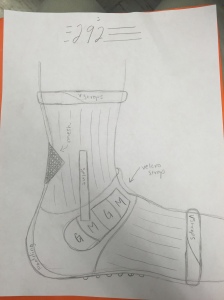 At this moment my team is beginning to build a prototype of the design we believe will prevent damage to the ankle joint. We were supplied with many items such as safety pins a reusable sock, tape, pipe cleaner, Popsicle sticks, elastic, and much more. When we first began it was particularly difficult because we didn’t know how or where we would begin, how we would attach things together to make some progress towards our prototype.

We stop think and began doing; at the beginning of class our teacher had told us “it’s better to fail now than later when your project is almost due” with that in mind we set of. First we put the sock on Leyla to measure the length of our prototype on a person, and work from there. We can across many obstacles trying to achieve the effectiveness of the design and not focus on aesthetics. We are currently still in the process of making the prototype along with poking safety pins in our fingers accidentally.

Tying along to our focus on our device we wanted the device to prevent ankle sprains and according to WEB:MD  “Most types of ankle sprains  happen when you make a rapid shifting movement with your foot planted, such as when you play soccer or get tackled in football.”Often the ankle rolls outward and the foot turns inward. This causes the ligaments on the outside of the ankle to stretch and tear. Less often, the ankle rolls inward and the foot turns outward. This damages the ligaments on the inside of the ankle.” Which is why we wanted to put some kind of sturdy support on the fibula bone to prevent from its to roll outwards since it is the most common way to get an ankle sprain.