Chapter 8 of the book Rigor Mortis is titled, “A Broken Culture.” Nothing more adequately sums up the message of this book than this title, as the issue behind the stiffness in biomedicine is entirely due to researcher’s job structure and requirements. What has become of the culture of biomedical research is slowing down progress and backtracking our discoveries.

The field of biomedicine is not suffering because of any factor really other than the way that research and publication are handled. Modern science demands rushed results, and lacks the curiosity that seems critical to science. People’s demand for money, answers and recognition has distorted and corrupt biomedicine to a point of invalidity. What I found particularly interesting was the detail shared about Charles Darwin and how vastly his work environment and expectations differed from modern scientists. “As a gentleman-scientist he had no need to hustle for money. And he was in no hurry to publish his discoveries.” (170.) The book shares that many scientists would disregard his method of research, as it was entirely driven by curiosity, not a hypothesis. But yet, Charles Darwin formed the foundation of what biology is today. So why wouldn’t researchers follow along more with his methods? Well, because most people’s passion for science does not exceed their want and need for a comfortable lifestyle. Because researchers are paid based on how much they publish or where their article gets featured, suddenly that becomes all that’s important. Often the accuracy and reliability of the content is ignored almost entirely.

I really liked what Lanna shared in her blog post, “It’s Okay to Make a Mistake”, “Whoever puts their results out first, gets the money, the fame, and maybe their name on a prize. This causes unneeded stress or worry.” And she’s right. When did science become a tool for self gain? Charles Darwin was successful in his career because he was not pressured by factors of money or fame, he observed the world around him out of a love and passion and curiosity for science, and I feel that is the quality modern scientists are lacking. Veronique Kiermer said something interesting in an interview with Richard Harris, “It doesn’t necessarily pay to be right. It actually pays to just be sloppy and cut corners and get there first.” (172.) That is where we see there is an issue in this field. Money and publicity is more important than scientific progress.

Several times in this chapter it was mentioned that often higher profile journals have a lower accuracy rate. I looked at the website for Nature and I couldn’t say I was surprised when the first line I saw read, “Researchers pull study after several failed attempts by others to replicate findings describing a proposed alternative to CRISPR.” That brought to life the reality behind the problem this book discusses. You’d want to turn a blind eye to the issue, but it’s hard when it is staring in your face and one day may begin affecting our everyday lives. 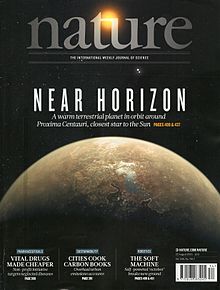 One thought on “Nature, Cell and Science. What about Truth? -Anne K.”