Get Me Out: A history of Childbirth from the Garden of Eden to the Sperm Bank by Randi Hutter Epstein is a book which ties back to pregnancy as early as in the 1700s and how much pregnancy has progressed since then. With the progression of science relating to childbirth which is very important because we are able to maintain knowledge about pregnancy, we can see how an embryo develops and the symptoms the mother undergoes to keep her baby alive and healthy.

Now, let’s take a look at everything that happens during the nine, long months of pregnancy!

First, we begin with the Embryonic Development which consists of the embryo forming and developing. The sperm cell and egg combine to form a single cell that consists of 46 chromosomes known as a zygote. Later the cell travels down the fallopian tubes and forms a ball known as the morula that attaches to the uterine lining to form the embryo. Can you believe it? A single tiny microscopic cell that later develops to be a human being capable of undergoing many tasks? 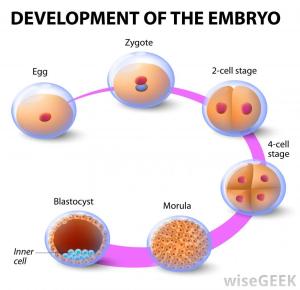 As the First Trimester takes place, the embryo begins very small at 0.004cm and slowly develops into a fetus at 7.5cm. The baby’s facial characteristics and ears, fingers and toes, and external genitals appear, the heart begins to beat,  and certain body systems form. As for the mother, morning sickness and nausea becomes very common due to hormone changes in the body. 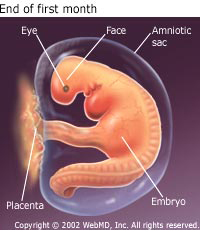 End of Month One

As the Second Trimester arrives, the fetus undergoes many changes such as fetal movement, lanugo development, and rapid increase in size. For the mother, it becomes more uncomfortable as the fetus grows. She typically goes through backaches, bleeding gums, breast enlargement, heartburn and constipation, and hemorrhoids, just to list a few.

Finally! The Third Trimester! This is the period of time when the baby grows its maxumum size in between 46cm-56cm. Though the baby is fully developed the baby can not survive outside of the womb before 28 weeks. During this trimester, the mother undergoes heartburn,  backache, difficult time controling bladder, leaky breats, and Braxton Hicks contractions, which is the body’s way of preparing for labor, and the mother feels these contractions now until real labor begins.

Now, pregancy isn’t just about a growing baby inside of your uterus is it? Its much more! Of course we have all heard that there’s a ton of pain during labor but no one ever talks about how much the mother has to go through during pregnancy and after labor. To my surprise, I found out that it doesn’t end right after labor but tipycally takes 6 months to a year for the mother to recover. After this unit, I have gained a lot of knowledge and am interested in learning more about pregancy because women do go through a lot.