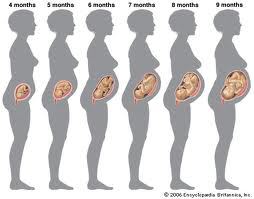 Over the course of this semester I learned that pregnancy is a crazy thing. Sure you’ve probably heard the stories and myths but there are some truly mind bending facts. For example, on the first day of conception the sperm penetrates the egg and within a matter of hours the Zygote already has 46 chromosomes! That’s only on the first day imagine the possibilities in 9 months. Pregnancy is broken up into 3 trimesters. The first trimester is very eventful. It starts with conception and lasts through the 12th week of pregnancy. In this stage the mother experiences symptoms such as nausea, vomiting, sore breasts, and swollen ankles, as stated by Parenting.org http://www.parenting.com/article/first-trimester-symptoms.  The mother can curve some of these side effects by taking vitamins (especially B vitamins). During the first trimester the clump of cells turns into a fetus. It goes from zygote, morula, embryo, to fetus. It begins to develop the brain and facial characteristics.

The second trimester is when the fetus experiences the most growth. At the beginning the fetus is 15 cm but towards the end of the second trimester it reaches 30 cm ! The changes it faces go as follow; skin, hair and nails are apparent, rapid brain development and the fetal heartbeat is audible with a stethoscope. Personally I think the most exciting part of the second trimester is when the mother can start feeling her baby. When I learned of this i was shocked at how soon you can feel your baby, and some women say they can feel their baby even sooner than that. Because the baby is growing so fast this is the trimester where mothers are most fatigued as stated by Ms. Cavazos from who works with new mothers and expecting mothers.

The third and final trimester is also eventful but not quite like the previous 2. The fetus is fully developed but isn’t able to live without medical attention yet. The size varies for each baby but usually the fetus is around 46-54 centimeters. All of its organs are completely developed and fat starts to accumulate on the body. Around this time is when the mother feels the most discomfort. I was surprised to learn that you shouldn’t sleep on your back when in the third trimester or anytime when your pregnant because it cuts off nutrients to the baby.  The mother may also experience Braxton-Hicks contractions which is the body preparing for birth.

In conclusion I am now much educated on pregnancy and I am excited for the future for when I can understand a pregnant women and inform her of what is going on inside her body.