I found it interesting that healthcare was a combination of philosophy and  medicine because men wrote books about the birthing process instead of women who I suppose, knew more about the process and subject than men.Male doctors wouldn’t even look to see what they were doing to the female or the baby while she was giving birth so I think it was irrelevant that they wouldn’t really know what they were supposed to do but wrote books about the woman’s childbirth process. I also found their superstitions about women and men weird because the book said,

I found this extremely weird because that doesn’t really mean anything it was just weird on how did they even know, I mean they didn’t even want to see down there. There was also the one about the man the book said

“There was some remedies for small penises. It said the had to eat beans and roughages because “windy spirits” will inflate their penises.”(12)

I found it funny because i’m not sure if it really worked but I guess they believed it worked if they had those types of remedies. I found it interesting that forceps opened up the door for other birthing gadgets considering that it kind of looked like two spoons connected, but if it worked that is great. I was really interested  that the man- midwife sometimes dressed  up as girls just to be able to go with the women  that was giving birth to a child but one of the man-midwives got caught doing that and got punished. I did not like that Marion Sims did not use anesthetic on african-american women when he experimented on them to cure vaginal tears. 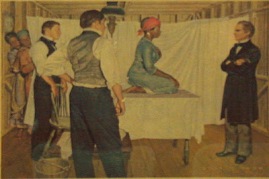 I thought it was inhumane and racist but he did live in the time period where they owned slaves which I think is wrong but he did cure vaginal tears and I do not know  how to feel about it because if the women he experimented on, wrote a book they would describe it as a really bad time for them and horrendous but I and i’m just making an educated guess.

I found it sad that childbed fever was the most tragic of all deaths but not the leading killer. It was sadder that men carried the babies home and buried their wives. I like how they found a relieved medicine called constitution life syrup that helped with pregnancy and childbirth. I like how they knew something was wrong but needed more information to be sure of themselves because they did so many experiments they thought they were right. People still blamed them when something went wrong. They would blame the person and the person felt bad which I did not like because they were just trying to help.