Finding the gender of a baby can be found by an ultrasound at the 4-5 month mark, but in the present day, we have been introduced to an innovation, known as the Non-Invasive Prenatal Baby Gender Test. This is a maternal blood test that can determine the fetus’ sex as early as seven weeks by taking fragments of the baby’s DNA in the mother’s blood. This test allows for the parents of the fetus to take action after receiving the test results, whether the results indicate that the baby may or may not have a sex-linked condition. Although, the results of the NIPT are mostly accurate, in some cases the baby that was said to have a certain health condition based on gender will most likely not be present once fully developed. But, many worry that parents taking this exam will not use this new innovation for health reasons.

“It seems highly likely that this new technology, far allowing earlier, cheaper and safer testing than amniocentesis, and more accurate results than ultrasound, will only increase the number of sex-selective abortions”

Instead, they will use it to abort their baby based on their sex because they wanted the opposite sex. This decision of “who lives and dies” based on gender is called Sex-selection, and it has been going on since about 1979, shortly after abortion was legal.

“At twenty weeks, the unborn baby is fully developed. The baby girls had reproductive organs of their own. They were capable of sleeping and dreaming. They could hear and recognize their mother’s voice. And yet the woman was having them killed because they were the wrong gender. Despite Clinger’s please, this woman aborted her babies.”

Sex-selection is not a relatively new concept, in places such as China and India along with other countries, boys are preferred over girls because they do not have to spend as much money for marrying the girl off, along with other expenses that a male may not have. Although in the U.S numbers on the preferable gender are not as bold as in places mentioned, yet the preference is still male. In America, it is legal in most states to have an abortion non-medically related. According to Planned Parenthood, sex-selection is a hoax, yet won’t have a problem with the patient wanting to abort simply on gender.

Not only is aborting a healthy child that you can sustain financially and wanted based on its gender morally wrong, there is also serious concerns that one cannot deny. Sex- 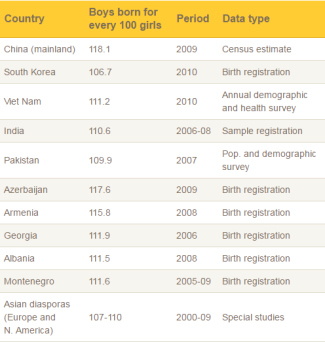 selection is affecting the natural ratio between man and women and we can already see vast numbers in differences between the sexes. The normal male to female ratio is 102-106:100, when the numbers are completely off that means sex selection has taken place. Over 200 million girls are missing in the world because of Sex-selection.
The table shows how the rate has changed in several parts of the world where sex-selection is the highest. Some countries not mentioned on the chart, are as high as 130:100. These changes in ratios will continue to grow with new innovations, affecting future generations. Many say that the inequality between the sexes will lead into forced or sold into marriages to reproduce, or even trafficking of women for the same thing.