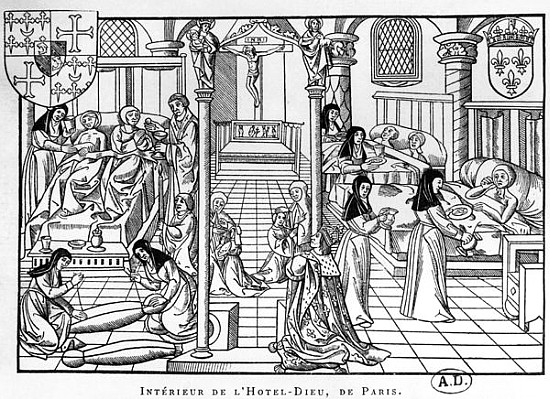 As I continue reading through the book I began to think, about how women regularly use to deliver their babies at their homes. So I asked myself a new question what did it look like when women begain to deliver in the hospitals? In the book it

explained how in the seventeenth century a hospital called Hotel Dieu in Paris had 3-5 pregnant women sharing a bed. The book exclaims

If a women died in childbirth, the other ones waited for hours or even overnight for the orderly to cart the corpse away. (64)

This was dangerous because the women could be spreading germs to each other.

Another reason that put the mothers as well as the babies at risk was that in medical schools it is required that the students need to be supervised by a senior student before delivering a baby and this was never fully followed. I believe that this rule should have been enforced more because the hospitals are places full with professionals and important supplies that not many people have access to.

Another thing I came across was how every women has a different experience related to childbearing based on their class and race. I came to read a story of a clinic owned by two men

named Samuel W. Lambert and James W. Morkoe with a funder named William A. Duer. In 1893 they received money from a financier named J.D Morgan. He bought the Hamilton Fish mansion to help expand the maternity care. In the book it says

They were shocked thet immigrant women preferred their own squalid homes to the stately mansion turned-hospital.(71)

This intrigued me because it explains that they were scared to change their surrounding. After their delivery the hospitals would keep them for a few weeks. This meant that their culture could change by eating different foods and seeing unfamiliar things.

This book has overall  helped me learn many things about childbirth and pregnancy. Get Me Out has taught me about the transmission of germs in pregnancy that can affect the mother. A germ I learned about was childbed fever  this germ killed women after they delived their baby leaving their families behind. I learned about the special tools they used in the process of delivering babies specifically the forceps which was a success invented by a family named the Chamberlen’s. And the other topic that gave me a lot of information was when women had midwifes helping them deliver the babies at home and then later choosing to go to a hospital for better care. I have learned so much with this book and I can’t wait to learn more this year in biomed.