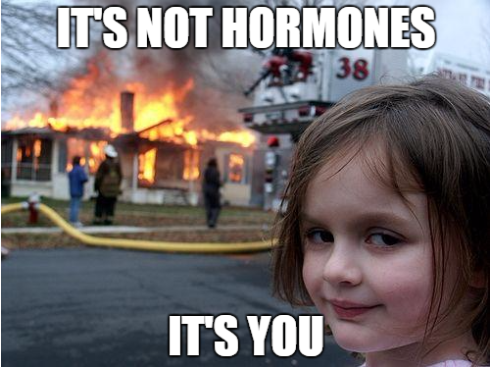 “They knew that women were mere puppets controlled by hormonal swings” (page 101).

Often when women are mad or sad, men say it’s the hormones or that time of the month. Yes, sometimes our sudden change in mood can be caused by hormones but in a new Stanford study, Dr. Henderson says that data does not support that hormones are the cause for mood swings. In the study, he says that other factors may influence mood swings such as stress and sleep habits.

Does our mind have control over our fertility? Well, wouldn’t many women like that, but we it doesn’t. Studies have shown that stress can negatively affect fertility because both stress and fertility are a part of the hypothalamus. Research tells us that stress boosts stress hormones which restraints the body of many sex hormones.

Hormones can both impede bodily functions and cause some psycholo-

logical problems. For example, depression is a mood disorder it affects how we feel, and how we handle daily activities. “Levels of certain hormones, such as those produced by the thyroid gland, can be factors in depression. In addition, some symptoms of depression are associated with thyroid conditions.” (WebMd.com) Hormones don’t just affect women but men as well, although in the table shown women still experience more depression than men all around the world.

This led me to wonder, are women more affected by hormonal imbalances leading to more health problems than men? In thedoctorwillseeyounow.com I found yet another health problem caused by hormones: “Polycystic Ovary Syndrome (PCOS) affects millions of women in the U.S. It is estimated that between 5-10% of women suffer from PCOS, making it the most common hormone disorder that exists in women of childbearing age.” Are hormones most imbalanced during pregnancies? I looked at http://womeninbalance.org/ which did not say anything about pregnancies causing a hormonal imbalance, although it did say, “Hormone imbalance may also be caused by toxins,” I found this interesting because the 9th chapter of the book talked about DES but as I searched I did not find anything about that said that DES caused hormonal imbalance but I did find that “DES is a transplacental carcinogen (a cancer-causing agent that crosses the placenta and causes reproductive cancer in offspring), a teratogen able to induce developmental defects, and an endocrine disrupting compound (EDC) that alters appropriate hormonal responses…” (ncbi.nlm.nih.gov).

It does not specifically say that DES causes hormonal imbalance but it does say that it causes some issues with hormones. As I kept on reading the report on DES, I read that DES increases women’s chances of breast cancer from 1 in 8 to 1 in 6, this was also said in the book:

“The drug was finally pulled in 1971 after a few oncologists proved the cancer connection” (page 130).

These after effects were warned yet, why would a woman take this pill without thinking about the after effects on her and her baby? The book said and I believed, that at the time DES came out we were in a patriotic state, we believed that we were on to, we had the latest science, we were going to the moon and much more. I think we thought we were so ahead of everyone that we had everything right. Also, DES just seemed like it worked and many people glorified it without knowing its side effect.

So far I have read about natural birthing, forceps, twilight sleep, and others but the latest addition has been the cesarean section. This is a surgical procedure where the mother is cut open so the baby can be taken out. My mom had a cesarean section, she said it was because the baby hadn’t turned and there was no other way. There are many reasons for getting a cesarean section like you have too many kids in the womb, you have an infection, the baby is too big, and many other medical reasons. What surprised me was that Haseltine said,

Haseltine wanted to have a C-section because she did not want to go through the possible after effects like tears and hemorrhage. There was no medical reason for Haseltine to have a c-section, other than she wanted one. I personally wouldn’t want to be cut open.

Freebirthing is a scary thing to me because so many things could go wrong. I

would rather have a doctor (a whole team of professionals if possible) because they know how to deal with things and complications. I don’t criticize women who choose this route of birthing, but I ask myself what if something goes wrong during the labor time? What is there are complications? It’s because of these questions that I would rather have a professional present.

One thought on “Hormones and Other Things (Blog #2)-Celeste o.”