In the past few class periods, we started working on our prototype and the purpose for our prototype was to see how our idea would come to life and to see what we could fix from it. The materials we used on our Prototype #1 were the following, black and white cloth, white clay, socks, lace, staples, tape, two stars for decoration, plastic cloth, cotton balls, and bias tape. As shown below:

We used the black sock as the sleeve for our prototype. We made a cut through the bottom of the sock to make sure it could go all the way up to the knee. Then we got two pieces of plastic cloth and put cotton balls in between the two, then stapled around the plastic cloth to hold in the cotton balls. After that we decided to use the white clay for the padding of our prototype. We placed it on Keira’s knee to get an idea of how the shape of this should be since she was also the one who tried on the black sock. After we created a circular shape with the clay, we decided to place it over the plastic cloth of cotton balls. We wrapped the plastic cloth and white clay with black cloth and then placed it on the top of the sock, we stapled around the black cloth for them to stay in there. After that we decided to use bias tape to wrap around the sock and back front to then tape it on for it to stay. After we finished putting it all together we decided to decorate it with a blue star in the middle, using tape to make it stay. We also added lace white cloth material, wrapping it around on both the ends of the sock. After finishing our prototype we found out a couple of things. It was really crooked and really lose on the knee, it wasn’t stable. The straps we used, which was the bias tape, kept on falling off and having the padding on the outside wasn’t helpful. Since Keira was the one that tried it on, she said that it didn’t feel secure and that the sock was constricting.

This was our final Prototype #1.

When we started working on our second prototype we knew that the padding should be in the inside instead of remaining on the outside because that way it would be more stable. So, we got to work and we used the same materials as we did in prototype #1, except for the bias tape. Before putting the padding inside of the sock, we had to adjust it a little because the black cloth that was surrounding it was coming off, so we stapled it once again making sure it was secure. (Shown below) After that, we set it inside the sock and tapped the lace white cloth for decorating again on both ends of the sock. 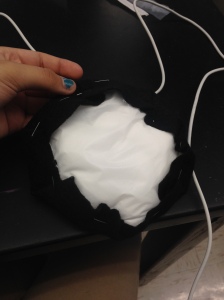 When finishing our second prototype we also found out other things. It was way better than our first one but it wasn’t restricting and we have to find a way to make it stable. We also have to find better material for the sweat and doesn’t get the knee so hot. But other than that it was comfortable and it was good, said Rinda who was the one trying on our prototype this time.

I think that doing this prototype activity was really helpful for my team and I. When creating our first prototype we didn’t know how to start or what kinds of materials to use, but we communicated with each other and just started working. It was helpful because on our second try we already knew what worked and what didn’t, it also helped us to know how we could improve our prototype. Our Prototype #2 was better than our Prototype #1 and we were very proud of it. Now we know what else we should work on to make it better. Another way it was helpful for me was to actually think of how this is something that will come to life and how it should be ready to protect the knee-joint.