Last week was a crazy week full of knee joint making and research. Looking back at last week I have to say that it was a little chaotic, but everything turned out alright. The big thing last week was creating a joint model of the knee. My group and I (RunnerPro) were given the challenge of recreating the knee joint with some materials including clay, pipe, rubber bands, wood and pipe cleaner. When we walked into the MakerSpace the first day and saw what we had to work with we all knew that we were gonna have to put our thinking caps on! We spent the first half of class trying to come up with somewhat of an idea as to what was going to represent what. We had a skeleton that we kept staring at and playing with to try and get a feel for the motion of the joint because we really wanted to make the joint as lifelike as possible.

After just thinking for the first half of class we decided to jump right into the joint making by cutting up a PVC pipe to represent the femur and the tibia and the cutting a small wooden rod to represent the fibula. We glued the fibula and tibia together but we were stumped when it came to how we were going to attach the tibia and femur. Finding a way to attach the femur and tibia was a major setback to our process. My group and I wasted a lot of time trying to find a hinge (our ideal way of attachment) that by the time we just decided to move on to the ligament and tendons we had only one class left.  That was when we really realized that the pressure was on and we needed to get a move on it.

After scavenging through our house for spare hinges we ditched the idea and decided to connect the bones by the ligaments (rubber bands). This caused some problems because the rubber bands were small and needed to support a lot of weight and the clay that we used to make the bones more lifelike made our model very fragile. Trying to glue the rubber bands to the clay that was not drying was a nightmare. We were constantly re-glueing and by that point we were all ready for the project to be over with. We just decided that we would be very careful while modeling our model. 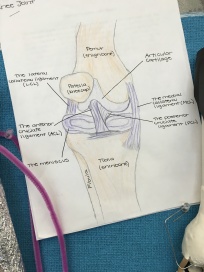 When the day came to present the model was still in one piece thankfully and I was glad to be getting this over with before I broke something. I had fun presenting my joint model because I was very proud of it. I think my team and I did a great job designing the model and with what we were given we made the most of it! This project might have presented a challenge but challenges are good! I learned a lot and I am one step closer to becoming a knee joint expert!