During the second semester of biomed we have been working on our DAP.  Our group Save-a-Joint has a goal to make a protection device for a roller derby player.  We were assigned the elbow which at the beginning hadn’t been one of our top choices but I think I can speak for my team when I say its actually nice working with and about the elbow.  At the beginning it was tough to come up with a team name, aside from the detailed parts of an elbow and its joint we have also learned about the customer needs that are necessary and helpful to the making of our product, some that are helpful are those that can actually be measured for example, protection.  We will take these into major consideration when building this protection device since sometimes when we make things we forget who is the one that needs the product.  The class before we started on our model I took over the task of drawing some sketches of the elbows parts, this helped us a lot during our model making and presentation.  The sketches included the muscles, tendons, ligaments and bones.  Since we had to look up stuff for our model we learned a lot, about the flexion muscles and such. 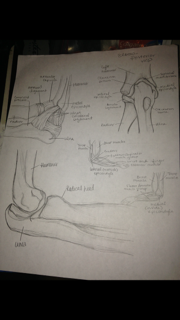 As a group we have already finished the elbow model we made and we worked on it for a while.  We made sure to include the muscles, tendons etc. and tried to make it look realistic.  It has a good function considering we thought it would fall apart besides of the white playdoh we were given, but it worked out in the end and it was fine.  Working on this as a group made us learn together about the elbow since we had signed up for the ankle at first.  For our model we had first started off with pipe cleaners and then we started to wrap it in the white playdoh, we eventually switched one of the “bones” with a piece of wood and we wrapped it all in white playdoh.  Then we figured that the joint area would stick together if we just left it like that so then we decided to cover the joint areas in some plastic wrap and it worked out.  Lastly we painted tendons, ligaments and we used pipe cleaners to kind of make a 3D outline of the muscles on the arms.  We had started out a bit rough and slow but in the end it didn’t look too bad and it functioned well.

With the assistance of some pictures and researching we figured out a lot about the elbow.  Working in the same group hasn’t caused an issue so far which is good and was expected.  We communicate well and outside of class if we need to catch each other up or remind each other of something we always do so.  The trip to the maker space gave us the hands on portion to the project which was good because we have insight of what we really are building this for, a human body part that we have learned is really necessary to us.  We have also worn the roller derbys usual elbow protection for the elbow. It had some things that we observed and felt when we wore it that we believe could be changed.  I look forward to the final product we come up with and our detailed proposal that our team will make.

One thought on “Save-a-Joint – Paola E.”