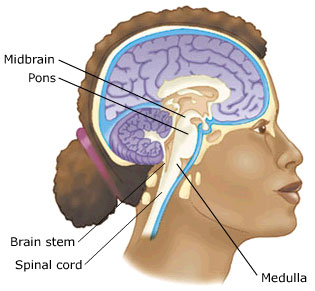 For our class assignment, we where asked to look up information about the Brain Stem. The brain stem is a very important part of the brain, it’s in charge of breathing, blood Pressure, digestion, heart Rate, and much more. It is located on the posterior part of the brain, it connects your brain to the spinal cord, and sends motor control signals between the brain and the body. It is also part of the mid brain, pons, and the medulla oblongata. The brain itself is a very important part of the body, without it we wouldn’t be able to do the things we do now such as sleeping and the activities that were mentioned before. The brain stem also helps us with our sense of balance so that we don’t fall. The brain stem is approximately three inches long, and is also in charge of auditory reflexes such as the startle reflex in response to loud sounds. If the Brain stem is injured, it will affect your heart rate, breathing, and swallowing. Also if the brain stem is injured, the person can be diagnosed as brain dead, it can cause head and neck injures. 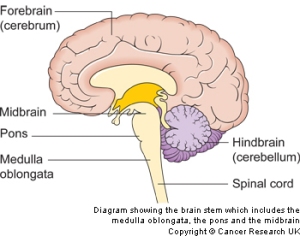 Making strong contact with it, could possibly paralyze you. The brain it self has an important part in the body, but looking more into the brain the brain has the most responsibility over everything. The brain stem controls all of our basic body functions as said before, and if we aren’t able to do the basics, we aren’t going to be able to do much at all. From the beginning,  the brain has been a vulnerable part of the body, in your younger years it’s the most vulnerable,  but as you grow, your brain matures and becomes less and less 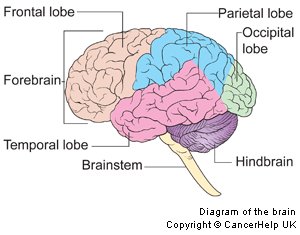 vulnerable to many things you were/are exposed to that would damage regular brain development. The brain stem plays a big part in our bodies and we have to make sure to prevent any damage done to it, in order to live like a human should.