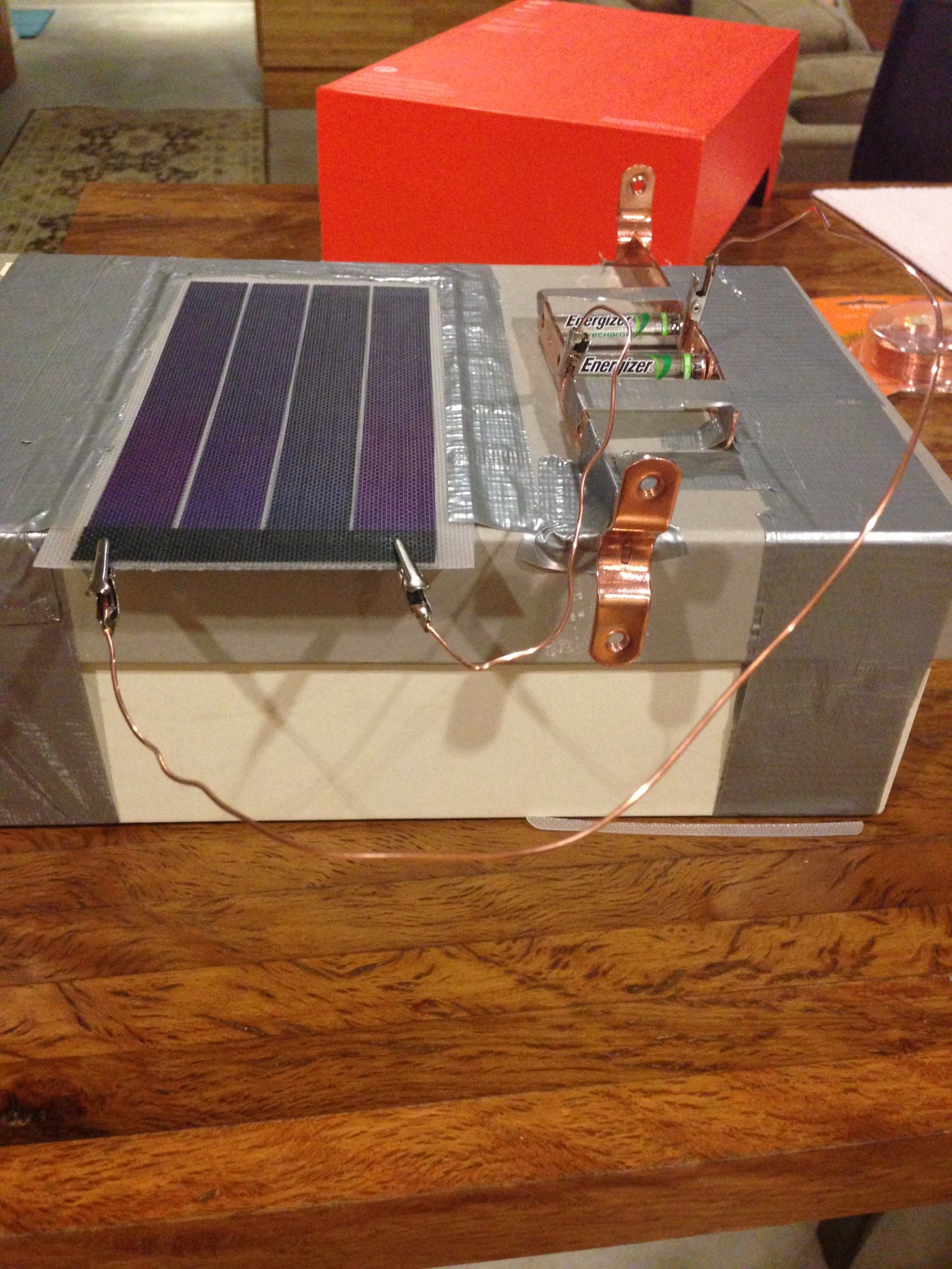 Six months ago, I never would have imagined that I would have that I would have survived senior year, let alone finished designing and making my biomedical engineering project. But somehow, there are only thirty-six days until I graduate, and I finally finished my biomedical engineering project! While I successfully completed my product about a week ago, I did not present my product to the Ann Richards School community until Friday, April 24th. As I mentioned in my previous blog post (which can be found here), I spent a lot of time working on the Google SketchUp model. While I did complete my SketchUp model, my final product looked vastly different from my model. I spent about two nights initially completing my product. I had originally designed my final product to use copper tape in place of the current scrap copper wire in order to conduct and pass the electrical current from the solar panels. However, I ran into a problem, when I realized that no store in Austin had copper tape. I had completely built the cardboard and battery frame for the design believing that one hardware store in Austin would have copper tape. Much to surprise and frustration, not one store in Austin or the surrounding area had copper tape. I called every hardware store in Austin, Georgetown, and Cedar Park. Not one had copper tape. So, the night before my project was supposed to be completed, I drove to Home Depot, and searched for the expertise of someone who could help me figure out a way to salvage my project. Jim, the kindest man to ever walk the earth, stopped his closing duties for Home Depot and spent thirty minutes with me, bouncing ideas back and forth. After I suggested using copper wire to somehow conduct the electrical current in place of the copper tape, he suggested using scrap copper that Home Depot collects to serve as the base for the junction of the charging ends of the battery and the copper wire that would carry the electrical current. After basically crying my thanks to Jim, I went home and successfully completed the project using scrap copper and copper wire.

After using a copious amount of duct tape and copper wire, my project was finally completed. I used a volt meter to measure to ensure that the batteries were receiving electricity from the solar panel, and they were. In fact, I placed the Make Your Own Light device outside in the direct sunlight, and the two batteries were completely charged in four hours.

On Friday, Ms. Jo and the makers organized the Make-o-Rama, which was a day long celebration of making. In the morning, my advisory worked to design a dress worthy of walking the runway during the Maker Showdown. My advisory actually ended up winning the entire Maker Showdown. After the Maker Showdown, all the students in the school worked to showcase what they had made or had designed throughout their classes. For the biomedical-engineering class, we had three shifts where different groups signed up to set up a table to present their product. I presented during the last shift right before school ended and showcased my final product. Because I presented during the last shift, the majority of the the people at the school had either already walked through the wing and didn’t realize that the projects were changing, or were busy presenting their own projects. That being said, I did talk to three middle schoolers who were really interested in the project and thought it was a really interesting project and design.

I worked extremely hard throughout the semester to design and make a product that was environmentally friendly and low cost geared for developing countries. Seeing as I essentially worked on my own for the project and met my two main goals of creating a product that was environmentally friendly and low cost, I believe that I would give myself an A. While I originally thought that I would design an actual light that was made of recyclable materials and used solar energy, I realized that there was a greater need for the ability to power a variety of electronics throughout developing countries, and my design allows for this to occur.

Currently, I am using my design to charge batteries that power my graphing calculator. While I have no plans to take the project to college and grow a business, I would like to use it in my home or give it to someone in the community who needs it. In the future, I think it would be exciting to get involved with a non-profit who is working to bring green energy and/or sustainable products to developing countries, such as Liter of Light. While I do not plan on pursuing engineering in college or after, the problem solving skills and the desire to improve my community that I learned in this class, have greatly impacted me.

6 thoughts on “Made My Own Light (Final(ly))- Eliza Martin”