After organizing and planning our ideas the Smoothie Blender’s have once again changed our minds. We no longer hold the name of The Smoothie Cycle but we are now officially called the Butter Babe’s. Its been quite a struggle trying to come up with an efficient way to blend smoothies. We have not received our materials do to some misunderstanding, however we hope to collect them as soon as possible. Due to some research and discussion we have changed our project to suit our prototypes purpose we realized that blending smoothies required much more energy to be able to crush the ice and blend the ingredients added. And since for most part the “customers” would most likely not all put in the same energy, not all the customers would be able to acquire the same outcome. Due to this we had to move into something that would required much less energy but would still be unique.

After our small research we came across the idea of making butter. At first we were quite surprise we weren’t sure how exactly it would work, but we decided to give it a try. After discovering an interesting way to blend the butter we became much more interested. In our discovery we discover that it was possible to blend butter with Heavy Milk, Mason Jar and a marble. We decided to test it out on our own, we used Heavy Milk and poured some into the Mason Jar. We filled it halfway, and instead of using a marble we decided to shake it our self, this lasted for about 20 minutes. The results were great, and we were able to attain a well butter mix. However as we tested we analyzed and re adjusted our idea for the prototype. 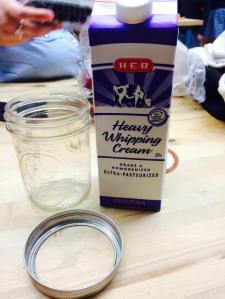 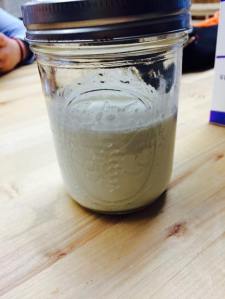 We agreed that we wanted to keep the bicycle wheel and apply it as we had initially had, however instead of having pedals we were going to somehow find a way to connect the wheel in the front to be able to rotate. Although we don’t know how we are going to attach it we still hope to keep the process that will help the blender get its friction and power to rotate and be able to blend. Furthermore we have finalized to make butter and use a smaller blender that will allow us to produce enough energy to blend the Heavy Milk and create Butter.

One thought on “Butter it Up by Yuvia Ruiz”