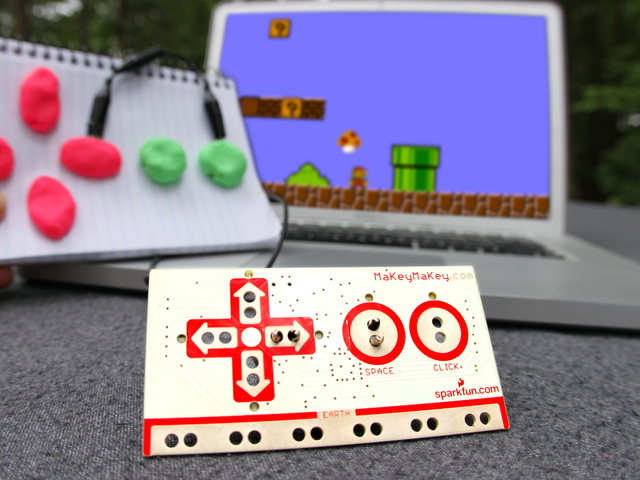 When I first learned of the Makey Makey, I found it intriguing and wanted to learn more about it. For those of you who wish to learn more click on the link: https://www.kickstarter.com/projects/joylabs/makey-makey-an-invention-kit-for-everyone
The link takes you to the kickstarter for the product and shows a video of the demonstration on how it works. With a Makey Makey, one could connect household items and those items can become keyboard keys. You can connect items such as bananas, pennies, scissors, play-doh, lemos, paint, and many moe things. Overall it’s a very clever product and something new.

With the Makey Makey, I along with my partner MFlores wish to make it easier for people with physical disabilities to use the computer. We decided to focus on people that had pain in their hands and arms to where it’s easier for them to use their feet. We stumbled upon a couple of disabilities such as: Amputations, Arthritis, Cerebral Palsy, Multiple- Sclerosis and many more. We research those further, but then wished to focus more on children and found Juvenile Idiopathic Arthritis. At first, I though Arthritis was something that affected older people, but I was wrong. JIA affects kids under the age of 16 and can have arthritis in one or more joints. For it to be considered JIA, a child mist have swelling and pain for at least six weeks; that’s a lot of time to actually be feeling pain in your hands.

The diagram shows the difference between a child with normal joints and a child who had Juvenile Idiopathic Arthritis.
Therefore with this disability in mind, we plan on using household items like play-doh and set up a model that kids can test out and be able to play a game online using their feet instead of their hands.
During the Maker Fair we want to set up the Makey Makey and connect it to a game such as Pac man and have the students play it and test out how it works. I believe this will be a new and enjoyable experience that will in the long run something that kids can benefit from.

2 thoughts on “Something Totally New- LBanda”