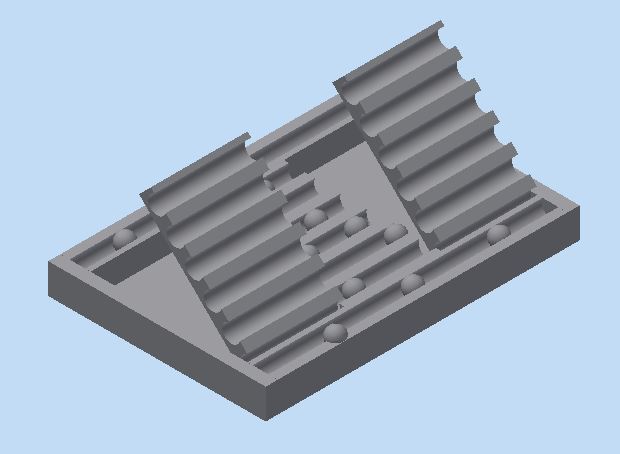 This week, as I rediscovered the joys of dimensioning, extruding, and constraining using a 3D modelling program called AutoCAD Inventor, I encountered two main annoyances which severely handicapped my ability to work effectively. For one thing, using Inventor on a laptop computer was much harder than using a mouse and desktop. I don’t think there’s a functional reason for this; in my opinion, with a little redesign and rethinking, Inventor would be perfectly easy and compatible on laptops. The second irritation was that Inventor was only offered for Windows, not Mac – which I believe has the same answer.

So far, I have only had experience with Google SketchUp (both Free and Pro) and AutoCAD Inventor. I thought the latter was far superior in terms of user compatibility, or human computer interaction. (For a good introduction to HCI, click here.) In essence, this concept describes how humans use the machines/programs in front of them; important factors in our experience include how intuitive each function or option is and how we consciously and subconsciously react to each interface.

One tangible example: SketchUp’s main drawback is that it holds no record of past work or drafts to refer to, in case of catastrophic mistakes. Plus, you can’t redimension a line or shape without deleting the entire object. That’s definitely not intuitive – think of how often you reach for your eraser during physical sketching! In my experience, this function introduces a risky, stressful element of “too bad, now start over!” which can ruin your entire project – like my early, abortive attempts to recreate our new design in SketchUp. I think I lasted 20 minutes (roughly eight false starts) before throwing up my hands and turning back to Inventor.

However, I hope I don’t sound entirely negative about my 3D modelling experience. Through fumbling with SketchUp, I did learn a new appreciation for how (comparatively) smooth and simple it is to use AutoCAD Inventor – and now I remember all too clearly how much work goes into crafting seemingly simple designs. A rectangular block with columns cut out of it? Expect 10 minutes or more of dimensioning, especially if you are still exploring and testing those functions, shortcuts, and terms like “fillet” and “chamfer” that you haven’t used in three years!

I understand that Revit and Solidworks are both commonly used programs in the professional world; I’ve had brief glimpses of both interfaces, but never had the chance to use them myself. I wonder if they could be user-friendlier and/or solve my particular issues?

A more important question: does a 3D modelling software exist which is truly intuitive for everyone, not only beginners or solely design experts? Google tried to democratize 3D modelling with SketchUp, which is an improvement from the previous market (no such programs) but could use serious improvement itself. AutoCAD is now offering a free three-year package for students – you can take advantage of it here – but takes more time and effort to learn.

More on our team’s specific process:

My teammate Erin and I were put in charge of 3D modelling and the “engineering” functionality of JetSet’s device (see her blog post here) so that our team’s work would be divided efficiently. Together we spent the last two class periods sitting in front of her laptop. We traded off the mousepad and keyboard, each of us modelling different components, while continuing a running discussion on which technique to use, how to best shape and dimension each part, and where to turn when lovely AutoCAD did not work the way that we imagined it would. Overall, our process worked very well and I look forward to finishing our design soon!

I suppose the main lesson I learned is that every program has its advantages and disadvantages – you just have to choose which one works best for your own needs. For JetSet, I believe that program is AutoCAD Inventor!